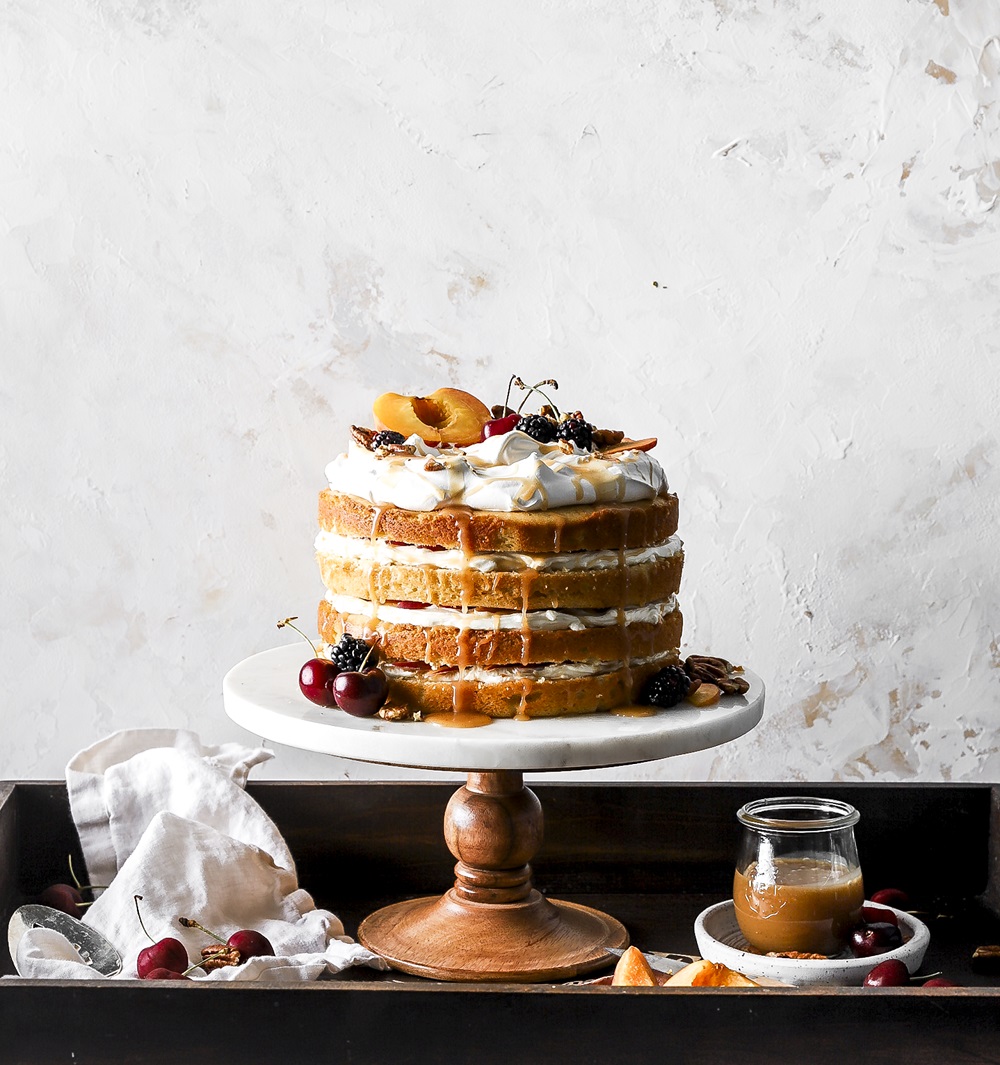 Our caramel peaches and cream cake recipe this week is the perfect sweet treat for the transition from summer to fall.

The peaches and light ermine buttercream with whipped cream on top are all light and summery, whilst the warm and cozy brown sugar cake drizzled with the caramel sauce evokes fall.

As every baker knows, the frosting truly is the icing on the cake and in Frosted, Bernice breaks down the different flavors, textures and characteristics of each topping and what it pairs best with. Never again will runny, overheated frosting mar a beautifully decorated birthday cake or deflated whipped cream ruin your dinner party dessert.

Whether you’re a baking beginner or a baking whiz, Frosted will add perfection to your bakes every time, helping you whip up inspired treats and irresistible yumminess!

Begin by making the custard for the Ermine Buttercream at least a few hours before frosting the cake, so it has time to cool.

For the caramel sauce, place the sugar and water in a medium, light-colored saucepan with a lid over medium heat. Melt the sugar in the water, but DO NOT STIR IT. After about 10 minutes, the sugar will turn an amber color. Remove the mixture from the stove, and stir in the cream. The mixture will bubble violently, so be careful. Stir the mixture until it’s completely combined, then whisk in the butter and pour the caramel into a heatproof bowl. Add the vanilla and salt, mixing until they’re completely combined. Cover the caramel, and allow it to cool to room temperature.

In a medium bowl, whisk together the flour, baking powder, salt and cinnamon.

In the bowl of a stand mixer fitted with the whisk attachment, beat the butter, oil and brown sugar together, on medium speed, until they’re light and fluffy. This should take 2 to 3 minutes. Then add the eggs, one at a time, beating well after each addition for about 30 seconds. Scrape down the bottom and sides of the bowl as needed. Add the sour cream and vanilla, and mix just until they’re combined.

Distribute the batter evenly among the pans, filling each pan only about one-half to two-thirds full. Bake the cakes for about 35 minutes, until an indentation made with your finger in the top center of the cake springs back. If the indentation remains, return the cakes to the oven for 2 minutes, or until the center springs back. Remove the cakes from the pans and allow them to cool completely.

To frost, cut the cooled cakes in half horizontally to make four cake layers. Use an offset spatula to spread one-third of the buttercream onto the first layer of cake. Top the buttercream with a layer of sliced peaches, followed by a generous drizzle of caramel sauce. Repeat for the second and third layers of the cake. Place the fourth layer on top. Spread the whipped cream on the fourth layer of cake and then top with the extra fruit and another drizzle of caramel. Refrigerate the cake for at least 30 minutes before slicing it.

This Caramel Peaches ‘n’ Cream Cake is best served at room temperature or slightly chilled. Store it in an airtight container in the fridge for up to a week. 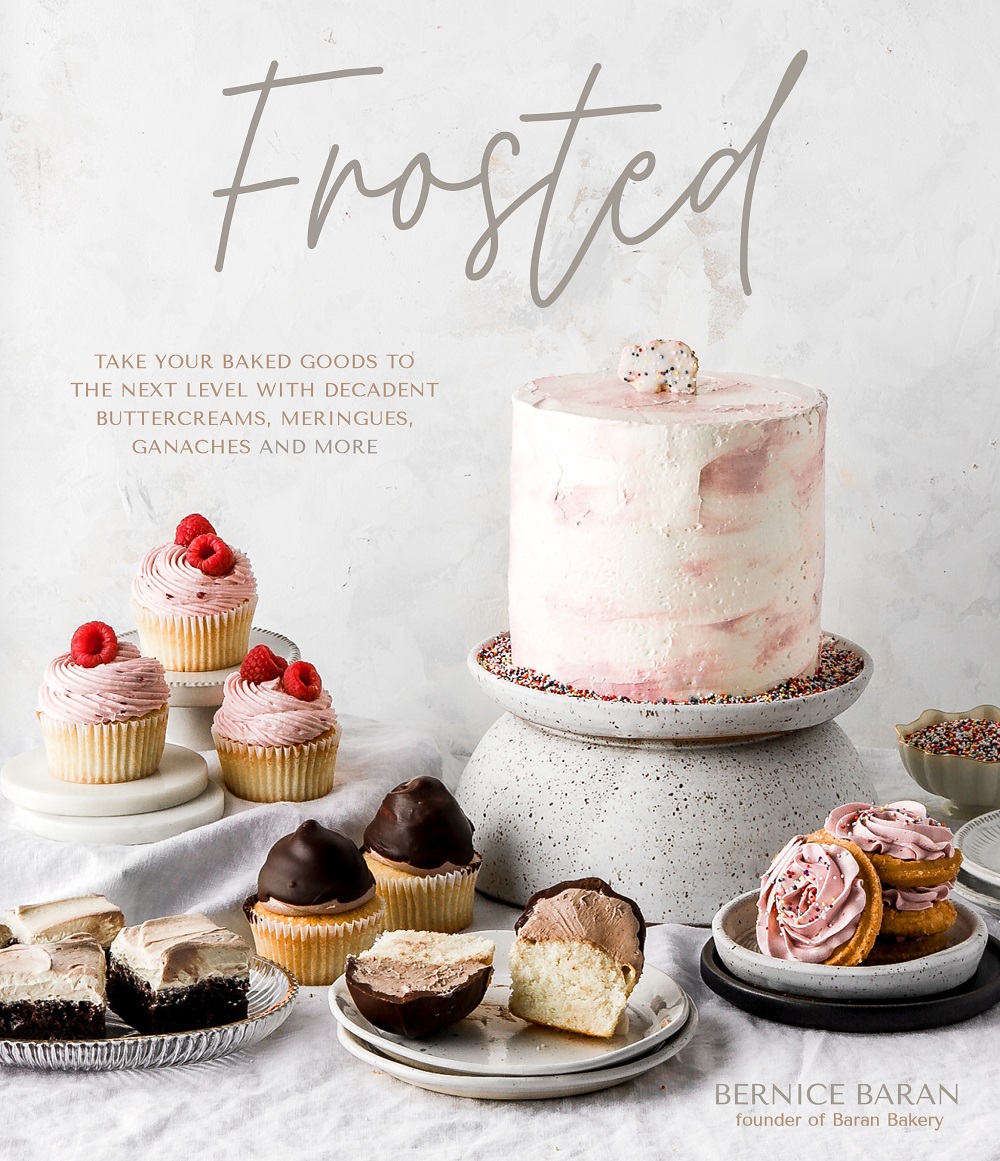 Ermine buttercream is an old-school buttercream that’s not too sweet, not too buttery, not too heavy and not too light.

My recipe differs a little from the standard, as I make a little less custard for the amount of butter used.

My version is a little more stable at room temperature. There are many variables that affect the emulsification of buttercream. Heat is one of them, so I adapted this recipe so that it won’t give you or me any problems, even in the middle of summer!

The best part about ermine buttercream is that, although it is really fluffy, it still holds up well with layer cakes.

In a small saucepan, whisk together the sugar, flour and milk over medium-low heat. Whisk continuously, until the mixture coats the back of a spoon, about 5 minutes. Pour the mixture into a heatproof bowl, cover the surface with plastic wrap to prevent it from forming a skin and allow the custard to cool completely to room temperature.

In the bowl of a stand mixer, at medium-high speed, beat the butter and salt for about 5 minutes, until the butter is fluffy and pale. Slowly add the cooled custard, a little at a time, to the butter; adding the custard slowly prevents the mixture from clumping and the butter from deflating. When all of the custard is incorporated, scrape down the bowl, turn the mixer up to high speed and beat the buttercream for 1 minute. Mix just until it’s incorporated.