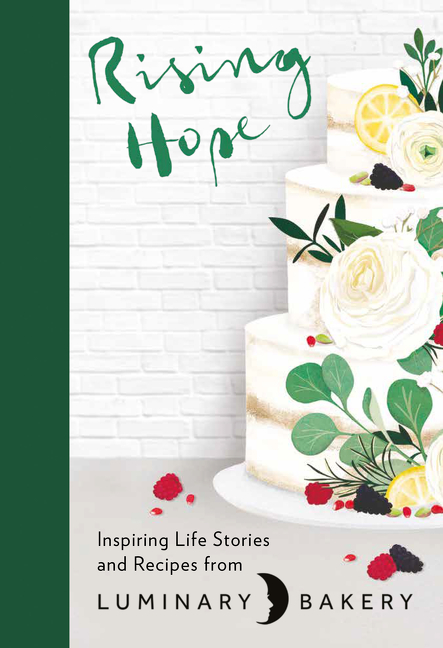 Rising Hope is the brand new cookbook from the wonderful Luminary Bakery, a social enterprise founded in London to support disadvantaged women, including those who were homeless, imprisoned, or sex trafficking victims, by teaching them how to bake.

The six-month training course Luminary Bakery provides for these struggling women facilitates personal and professional development – not only do they learn a trade, they are part of a safe and stable community. Some women are already great home cooks, and some have never picked up a whisk, but in all, hope begins to rise.

Each chapter features approximately 10 delicious recipes – from show-stopping cakes and small cakes, to desserts and breads. Every recipe carrying a woman’s name will have a short introduction by that woman, explaining why they chose the recipe and what it means to them. Rising Hope is a chance for these survivors to share their incredible stories of courage and persistence, along with their favorite recipes. This cookbook also features gluten-free, dairy-free, and vegan options, as well as options for those short on resources or time.

“Sarah’s cake is a delicious way to bring people together, which she can attest to after a neighbor’s daughter showed up at her home to learn this sweetly layered recipe. Whether it’s broadening your baking horizons or you’re savoring each bite of it at a party, this cake suitably weds the pop of fresh blackberry with the light pistachio sponge, making it perfect for any celebration!

Preheat the oven to 350°F. Grease and line the bottom of three 8-inch pans with baking parchment. Dust the greased edges of the pans with a little flour, tapping out any excess.

In a large bowl, cream the butter and sugar together with an electric mixer until light and fluffy. Mix in the eggs, one at a time, until fully incorporated. Mix in half of the flour, then half of the milk, mixing until no floury or milky patches remain, before adding the remaining flour and milk.

Mixing on low speed, add the vanilla extract and pistachios until incorporated.

Carefully fold the blackberries into the batter by hand, to avoid the mixture turning an unappetizing blue-gray color from the juices they can release.

Divide the batter evenly between the lined pans. Bake for 20 to 25 minutes until the sponges spring back to the touch and an inserted skewer comes out clean.

Let cool in the pans for 10 minutes before gently turning the sponges out onto a wire rack to cool completely.

To make the buttercream, melt the white chocolate by placing it in a bowl set over boiling water (don’t let the bottom of the bowl touch the water). Alternatively, gently melt it in the microwave, being careful to stop and stir it every 30 seconds to avoid burning it.

When the sponges are completely cool, trim the domed tops off with a bread knife to make them flat.

Place the third sponge layer on top, cut side down. Spread another quarter of the buttercream on the top, pushing it just over the edge.

To finish the cake with a smooth 90-degree angle on the top, use a palette knife to neatly drag the top edge of buttercream into the middle of the cake.

Decorate the top of the cake with a Luminary crescent moon shape using all of the decoration ingredients. First, sprinkle the finely chopped pistachios into a crescent moon shape, tapering off the ends—this will be your guide for the rest of the toppings.

Place the blackberries in the shape, with the whole ones at the widest section of the moon and the smaller pieces toward the ends.

Repeat with the whole pistachios and white chocolate buttons.

Finish by placing small sprigs of rosemary and mint leaves in among the fruit and use more chocolate buttons and pomegranate seeds to fill in any gaps.