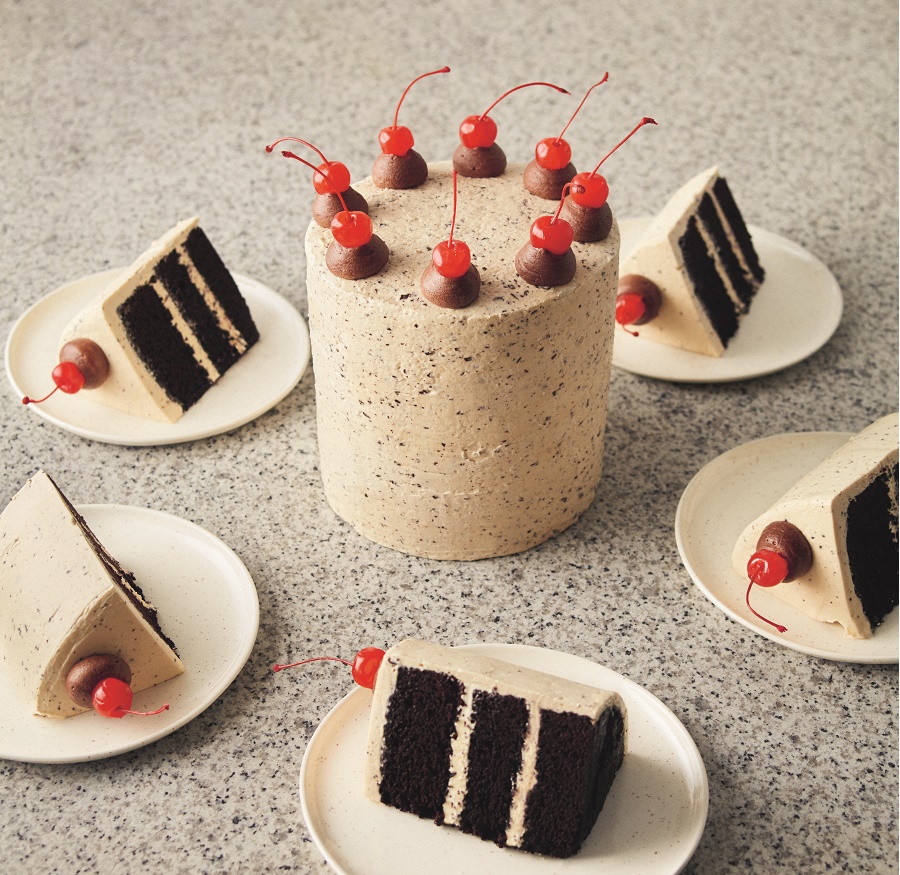 Sarah Hardy’s newly published book, Vegan Cakes, is a breath of fresh air. Full of exquisite recipes for beautifully decorated cakes, bakes and desserts, plant-based eaters no longer have to compromise on flavour or sheer decadence to satisfy their sweet tooth.

Some of our favorite dreamy cakes, fancy bakes and decadent desserts in the book include the cherry bombe princess cake, the strawberry mountain cake (literally a mountain of strawberries!), the exceedingly pretty apple Magritte cake decorated in a dappled blue sky with piped clouds, the array of fancy miniatures, the passionfruit meringue pie, the Persian lime & coconut pie, two intriguing vegan cheesecakes beautifully decorated and my all-time favorite dessert, tiramisu vegan-ized. But there’s lots more so check it out at the Amazon link below.

2. Sift together the flour, bicarbonate of soda, salt and cocoa powder into the bowl of a stand mixer fitted with the paddle attachment (or a large bowl).

3. Put both sugars, the soya milk and butter into a pan and heat gently until the sugars have fully dissolved. Remove from the heat then add the cider vinegar and vanilla extract and mix together. Leave the mixture to cool for 10–15 minutes.

4. Once the sugar mixture has cooled, slowly pour it into the dry ingredients with the mixer running on low speed (or use an electric hand whisk). Scrape down the sides of the bowl and then beat once more until smooth, taking care not to over mix.

5. Pour equal amounts of the cake batter into the prepared tins and bake for 20 minutes. (You can tell the sponge is cooked when it comes away from the edges of the tin slightly and a skewer comes out clean.) Leave the sponges to cool in the tins for about 20 minutes before transferring to a wire rack. Once fully cooled, use a large serrated knife to slice off the rounded dome tops so you have a level surface for stacking.

6. Make the frosting according to the instructions here: Vegan Italian Meringue Buttercream. Then very finely chop 50g (1¾oz) of the chocolate and combine with four-fifths of the buttercream to make the terrazzo buttercream. Melt the remaining 10g (⅓oz) chocolate in a microwave or in a small heatproof bowl set over a pan of barely simmering water.

Place the remaining fifth of Italian meringue buttercream in a bowl and beat in the melted chocolate until smooth and evenly combined. Set aside for decorating later.

7. Stick the first sponge layer onto a cake stand or board using a small dollop of buttercream then spoon on some of the terrazzo buttercream and smooth out to the edges with an offset spatula. Repeat the process using the second layer of cake and then top with the third layer.

8. Transfer the remaining terrazzo buttercream to a piping bag and then crumb coat and fully buttercream the cake.

9. Transfer the chocolate buttercream to a piping bag fitted with a medium round nozzle and pipe blobs of buttercream around the edge of the cake. Top each buttercream blob with a maraschino cherry.

We use cookies to ensure that we give you the best experience on our website. If you continue to use this site we will assume that you are happy with it.OkNoPrivacy policy